Multi-user access to models: no XML merges, no lock-outs

MetaEdit+ brings the benefits of version control to models, without ever requiring a merge or locking users out. Users work on a consistent, up-to-date view of the models, and can commit a set of changes to make it available to others. They can see what changes they have made, viewing them graphically, textually or as a tree, and can comment and name these as a version. The versions can be automatically stored in any major version control system: a local Git repository, a team’s SVN, on GitHub, Bitbucket etc. Users can inspect and compare versions to see other users’ changes or older states, both within MetaEdit+ or using the version control system’s own functions. 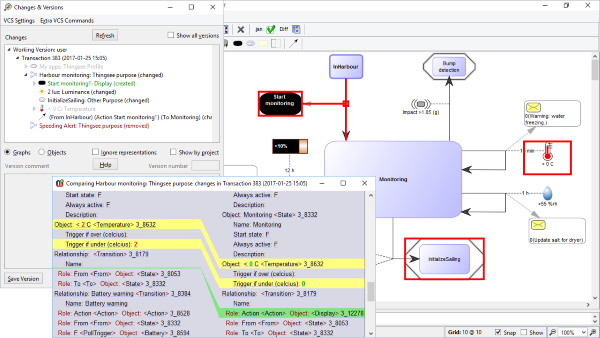 With Smart Model Versioning in MetaEdit+, you can: